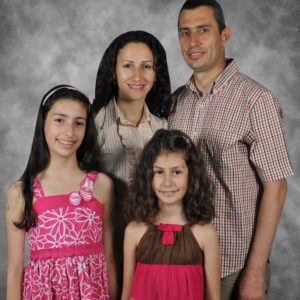 Sazan and Laureta were married in 2000 and have two children, Adela and Debora.Salvation Testimony of Sazan & Laureta:Sazan: I come from a Muslin tradition. In March 1995 I was a student. I studied electrical engineering. I believed that Christ was only for Catholic or Orthodox people. I lived in a dormitory and someone came to my room. I began to talk with him. He told me that I was a sinner before God. I considered myself right. I had heard that Christ died for sinners. But I didn’t believe that I was a sinner. God opened my eyes and showed that the only way of salvation was by his way – John 14:6. On that day I accepted Jesus Christ as my Lord and Savior. I thank God that in Christ he has made me a new creature and uses me for his glory. I join with honor and reverence towards our Savior Jesus with the new song in Revelation 5:8.Laureta: I grew up in a family that didn’t believe in God. Under the Communist system we believed that there was no God. After Communism fell, our country allowed people to believe in God. When I was in my last year in high school one of my cousins came to our home. She had a Bible with her and she begun to talk with me about Jesus. It was the first time that someone showed me God’s love for me. I had heard before about Catholic or Orthodox people, but never that God came for everyone. She told me that I was a sinner and I accepted this. She also told me that the payment of sin was death and separation from God. And after this she showed me that Jesus Christ came on the earth to take my sin, that he died and rose again. I believed in Jesus as my Lord and Savior. Since then my life has taken another direction. I went in Tirana to a church while I was a student and God change my life. I got saved in 1997 and what I want in my life is for Him to use me everyday for His glory.Ministry Training:Sazan: I received training from Bible Baptist Church of Tirana. I completed personal discipleship in the Bible Baptist Church of Tirana. I finished the Bible school offered by the same church that has different classes available for ministry in Durres.Ministry Before the Mission Field:Sazan: I served as a deacon in Bible Baptist Church of Tirana from 1998 until God called me to Durres. I have also served by leading the group of students in BBCT to focus on our community. I led students to have a testimony for Christ in our universities and to win those by preaching the Gospel.Current Ministry in Durres:In 2001 while we lived in Tirana, we started evangelizing in Durres and meeting new believers and discipling them. In 2004 we moved finally to Durres to serve God with faith for a church for his glory. A Bible church in Durres was planted by the grace of God. For several years now we also have served by sharing the gospel in the suburbs of Durres and the villages of the city. Our focus is to preach the gospel in every village of our city. Our town has 63 villages. Our prayer is that the Lord opens doors to accomplish His mission with His power.