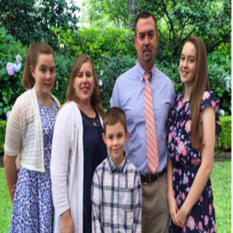 About The White Family & Their MinistryKevin’s Testimony:I grew up in a Christian home and went to church for most services. At the age of eleven during a Sunday night service I realized for the first time that I was lost and on my way to hell. During the invitation I prayed “Lord I want to be saved but I’m afraid to go up in front of everyone will you please send someone to show me how to be saved”. After the service a man came to me and asked me if I wanted to be saved. I told him yes and he showed me how to be saved. At that time I trusted Christ as my personal savior. Growing up as a teenager I did not live for the Lord like I should have but at the age of 21 I rededicated my life to the Lord and began to serve Him in every way I could. At the age of 25 the Lord began to burden my heart about preaching his word and I surrendered my life to Him and began to plan how I was to prepare for the ministry.Kevin’s Education:I heard Clarence Sexton preach at the National Sword of the Lord Conference at Gospel Light Baptist Church in Walkertown NC. During the conference he spoke about the Crown Bible College they had started in Knoxville TN. At that time I said if I ever went to Bible college that was where I would go. In the spring of 1999 I enrolled in Crown College and graduated in the fall of 2002.God’s call to the mission field of Bolivia:During a missions conference while in school I met a missionary named Austin Gardner. He challenged us to give our lives to reaching the world with the gospel. At that time I began to hear of the need in South America and the Lord began to burden my heart for the country of Bolivia. Beth and I were married in August of 2001 and upon my graduation we were able to take a trip to visit the country of Bolivia. When we arrived at the city of La Paz Bolivia the Lord confirmed in our hearts that this was where he wanted us to be missionaries.Preparation for the field:We began our deputation in August of 2002 and by God’s grace and blessing we were able to finish in February of 2004. We set a goal when we started to be finished in a year and a half. We scheduled meetings for every service possible and were in a total of about 250 churches during this time and drove almost 140,000 miles. The Lord blessed during this time and we were able to finish our deputation and met out goal of a year and a half.Family:How we met:The Lord has richly blessed Beth and me with a wonderful family. We met when I began to attend the Valley Drive Baptist Church in Fieldale VA in 1994 which is now our church home. We started out as just friends but when Beth went off to college we stayed in contact through writing letters and by phone. During this time we developed not only a great friendship but also a desire to spend the rest of our lives serving the Lord together. We were married on August 4th 2001 after Beth graduated from college.Our Children:I then finished my college one year later at which time we started deputation for the field of Bolivia. On June the 17th of the following year 2003 our first child was born Grace Marie White. We were able to finish our deputation in a year and a half at which time we left for Peru to study Spanish and do our internship. While in Peru on June the 1st 2005 the Lord blessed us with our second child Taylor Hope White. We are now serving the Lord as a family here in the country of Bolivia. Our desire is to have a balanced dedicated family that honors and serves the Lord.