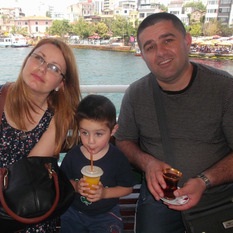 Ariol Veliu is from a small village in central Albania and was led to the Lord by his cousin. Ariol began to read the Bible a lot. Since there was no church in his village, Ariol started witnessing to people in his village and many got saved. They started meeting together to read and pray. Then he thought about all the surrounding remote villages. He would walk to them and witness to the kids there. This became his personal ministry before ever having a local church to attend.While a university student, Ariol was discipled in the Tirana Bible Baptist Church. There he met and married Nevila, a faithful disciple in that church. During a Bible conference in May, 2006, Ariol expressed his desire to serve the Lord in Turkey. Since that time, he has been serving faithfully in church, discipling others and helping with several ministries, including the college students.