Behind The Scenes: Music at OHBC

You are one of many Israelites, standing on the shore of the Red Sea. You have just experienced one of the most terrifying, yet awe-inspiring events in the Bible. Looking around, you see a wave of relief wash over the faces of your people. You didn’t know if you would make it out alive. You imagine the sound of chariots racing across the dry ocean floor, headed towards you, with intent to destroy and kill. You can still hear the wind, God’s cloud of protection, mixed with the crackle of His pillar of fire. And you’ll never forget the walls of water surrounding you and your people, on the right and on the left. Off in the distance, on the shoreline, you see Moses, slowly resting his hand at his side. God had instructed him to stretch out his hand over the sea, and Moses obeyed. God, through Moses, had closed up the waters of the Red Sea onto the Egyptians, the threat to His people now lost in the waves. You think to yourself, This is real. I believe Moses. I believe the Lord. Your thoughts are interrupted, as you hear a voice begin to sing. “I will sing unto the Lord, for he hath triumphed gloriously: the horse and his rider hath he thrown into the sea. The Lord is my strength and song…” It’s Moses! He is singing to the very top of his lungs. Every Israelite on the shore of the Red Sea begins to sing praises to the Lord, raising their hands in worship.

The story of Moses and the parting of the Red Sea is one of the most popular stories in the Bible, but we’re recognizing it in this blog post for something other than the separation of the waters. We’re highlighting this story because of the reaction of Moses and the Israelites when God led them safely to the other shore. Brothers and sisters, they SANG. They WORSHIPPED! They knew who had protected them, and they praised Him with song. There are countless stories like this in the Bible… in fact, music and instruments are mentioned over 1,150 times. Music is meant to be utilized in the way we worship, and it is an important part of our Sunday mornings at Oakland Heights. Dozens of people work throughout the week to make sure each and every person at Oakland Heights has the opportunity to freely worship Jesus in song, from musicians, to singers, to our tech team, to our worship ministry leaders. We have taken a “behind the scenes” look at what exactly has to happen every week to prepare a worship set at Oakland Heights, so read on! 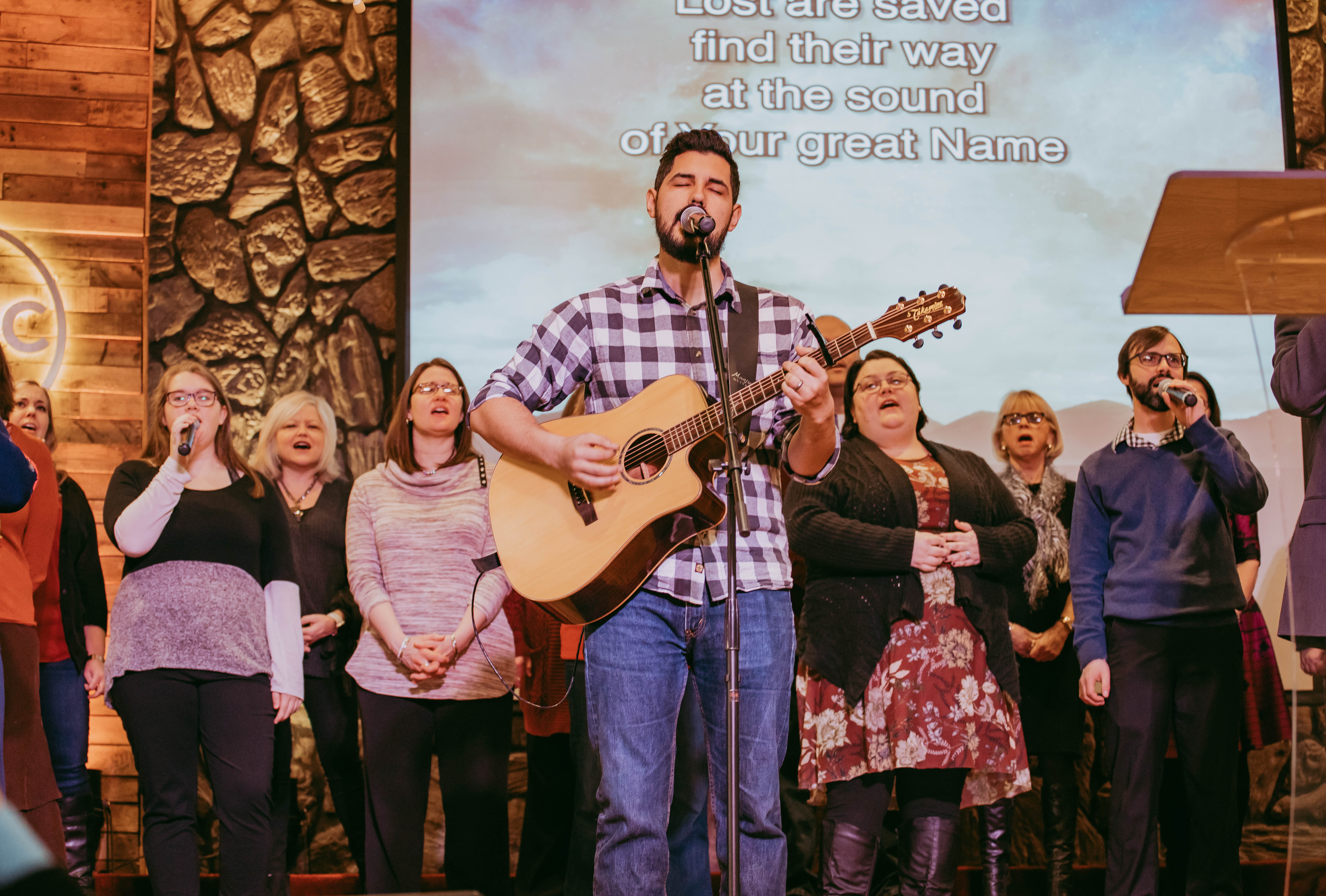 On 90% of every Sunday afternoon, you’ll find 3 rooms at Oakland Heights being occupied by people who serve in the worship ministry. In the Ladies’ Sunday school room, you’ll find Jarred Summey and about 4 or 5 different stacks of sheet music, Jennifer Williams sitting behind a piano that has to be moved for choir practice every Sunday, and the choir themselves, going over songs for the next week and weeks to come. 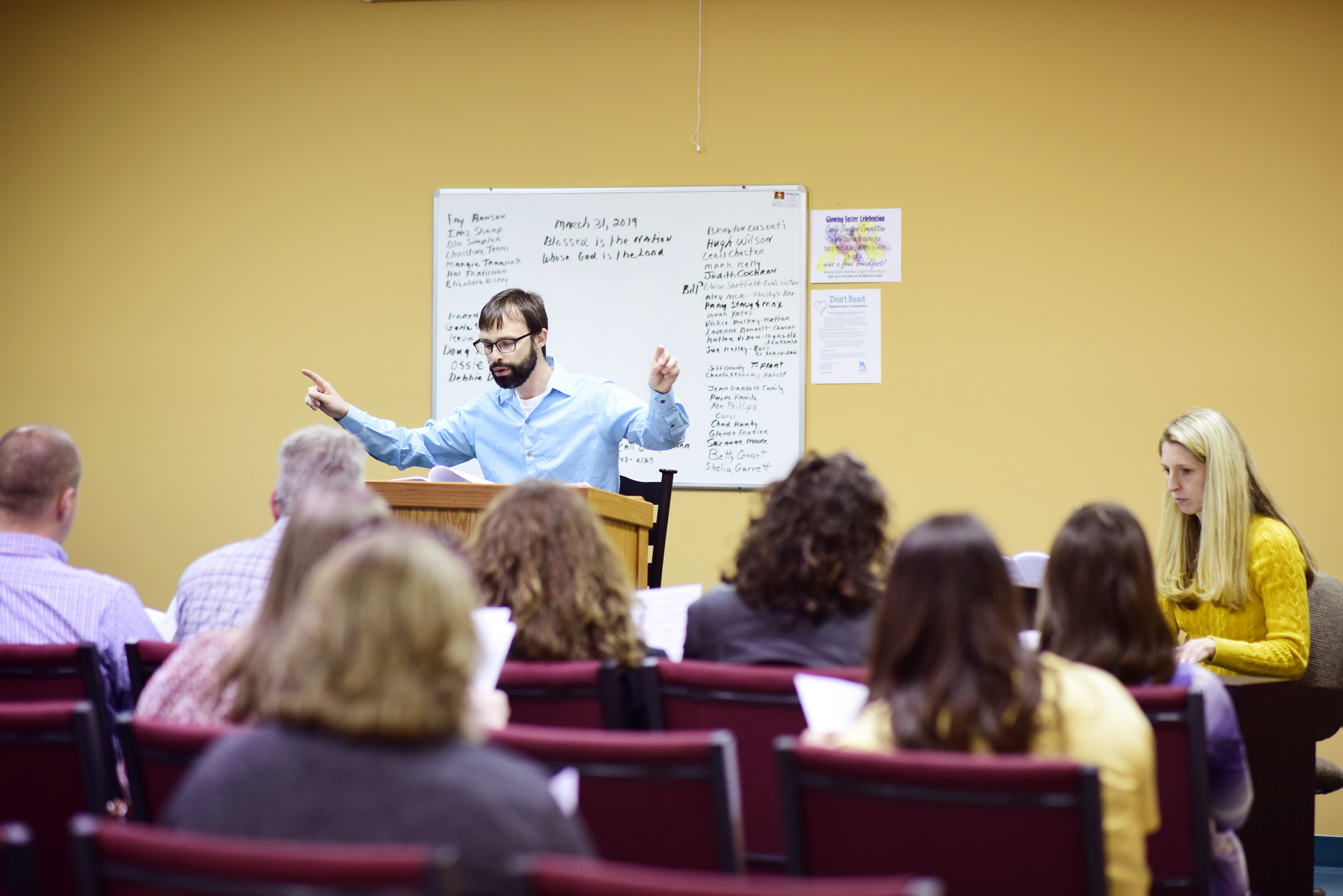 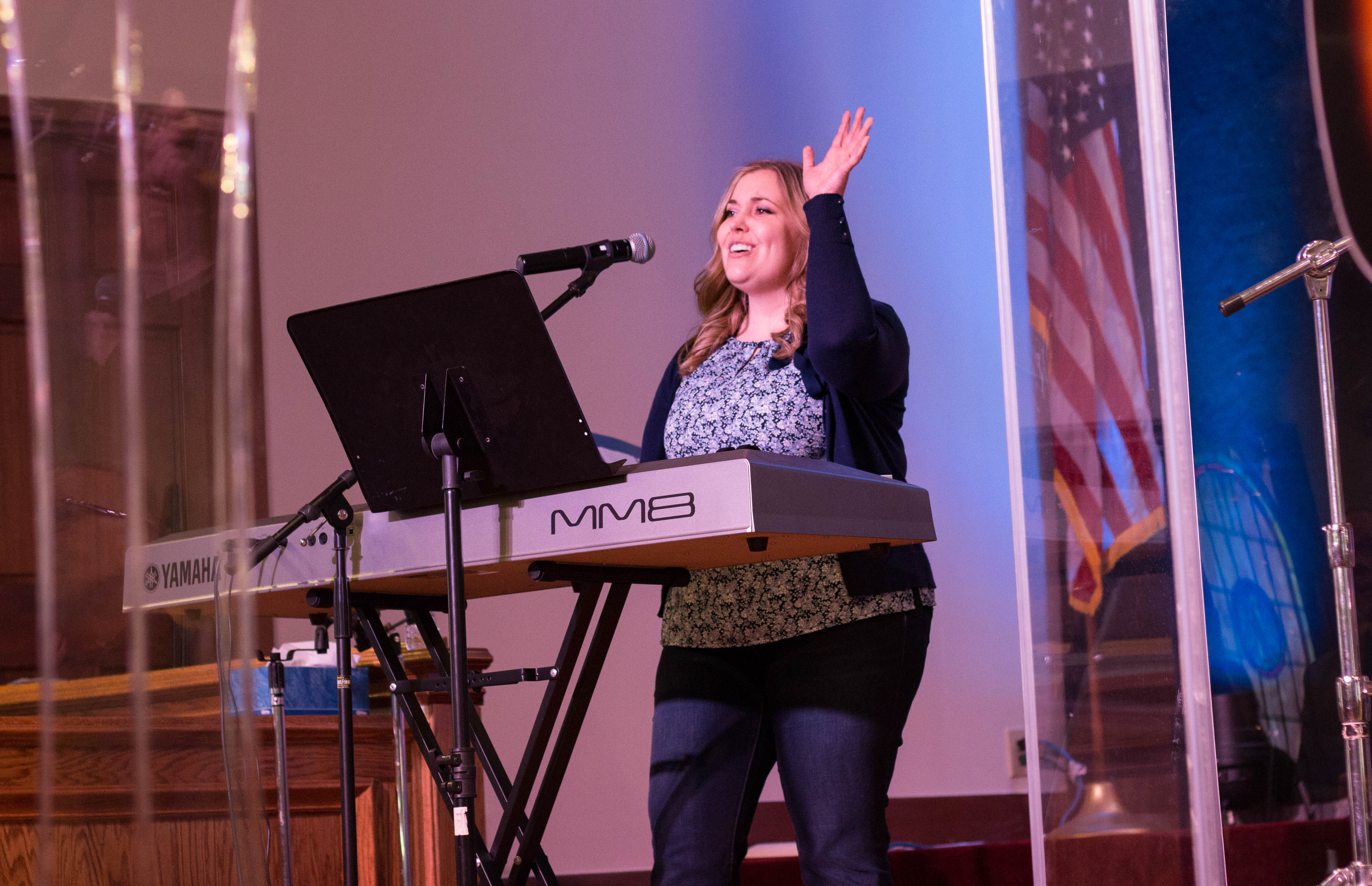 And lastly, in the sanctuary, you’ll find Josh Starr, our band, and our tech team, going over the following week’s worship set, and perfecting things like transitions, tempo, and our sound. That’s where I found myself first, this past Sunday afternoon. 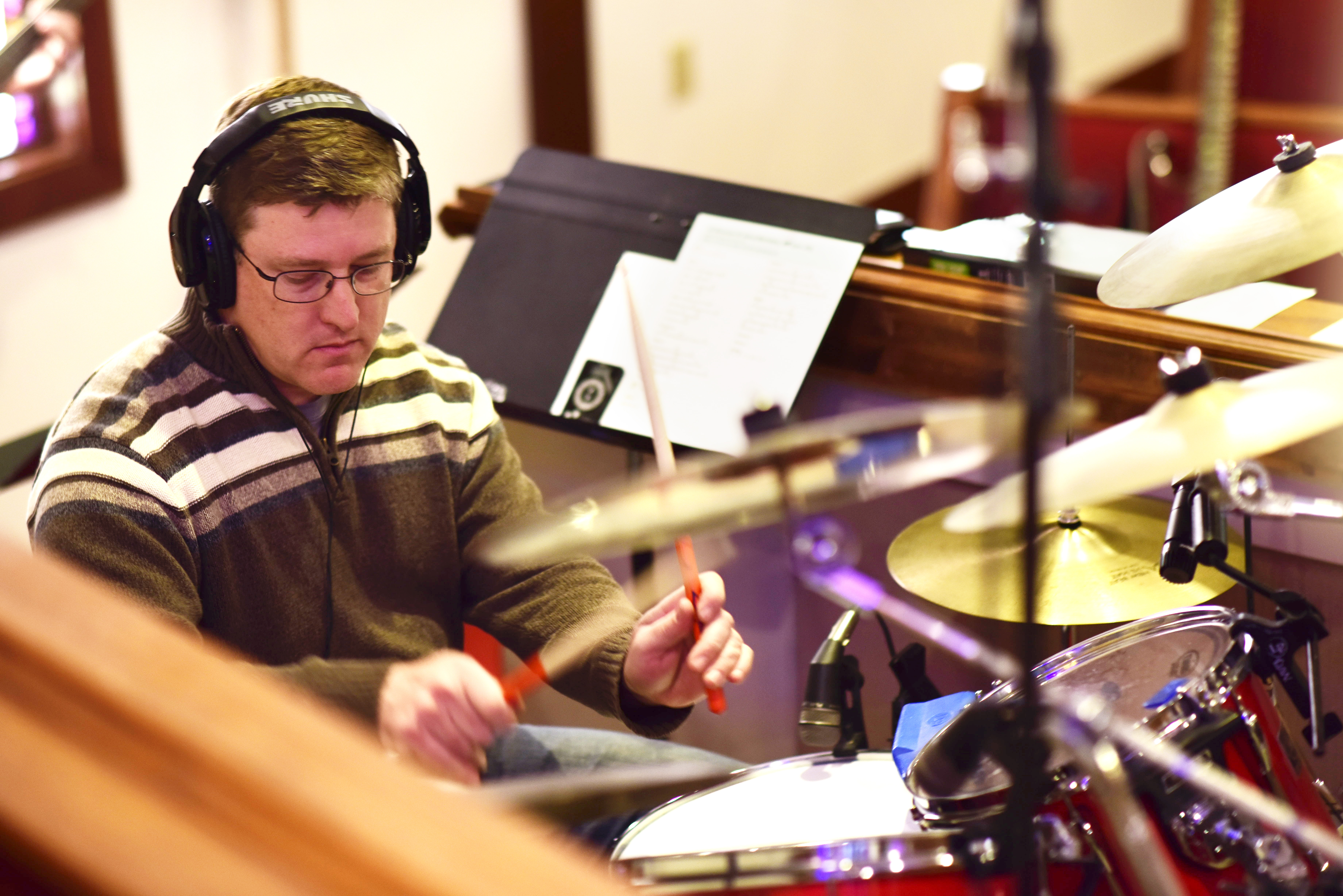 I walked into the sanctuary to interview Josh, and found him goofing around on the drums, waiting to begin band rehearsal. When asked what led him to get involved in the music ministry, he told me how he and his wife, Aria, had gone through a church closing, and spent some time looking for a doctrinally sound church to attend. He went on to say that it was important to them that they weren’t attending a church that was only focused on growing numbers, but a church that was interested in growing deeper spiritually. “We felt that Oakland Heights did that very well. It absolutely had almost nothing to do with music, apart from the fact that we were given those gifts, and we wanted to still use them. But it didn’t necessarily matter what the style was… we were just going to come and be a part of the body.” I also asked Josh what his favorite part and most difficult part of leading worship are, and his answer was the same for both… “The people.” And he doesn’t mean what you think! “The more numbers you throw in to the band, and the choir, and the praise team, the more time you have to dedicate to preparation. Like, I started learning to play piano this year, because that’s a wall that hindered my communication. So for me to be able to better communicate with Jennifer, I also have to possess at least the very basics of that instrument. I do think the hardest part is the people, because you have to be able to communicate through several different barriers.” 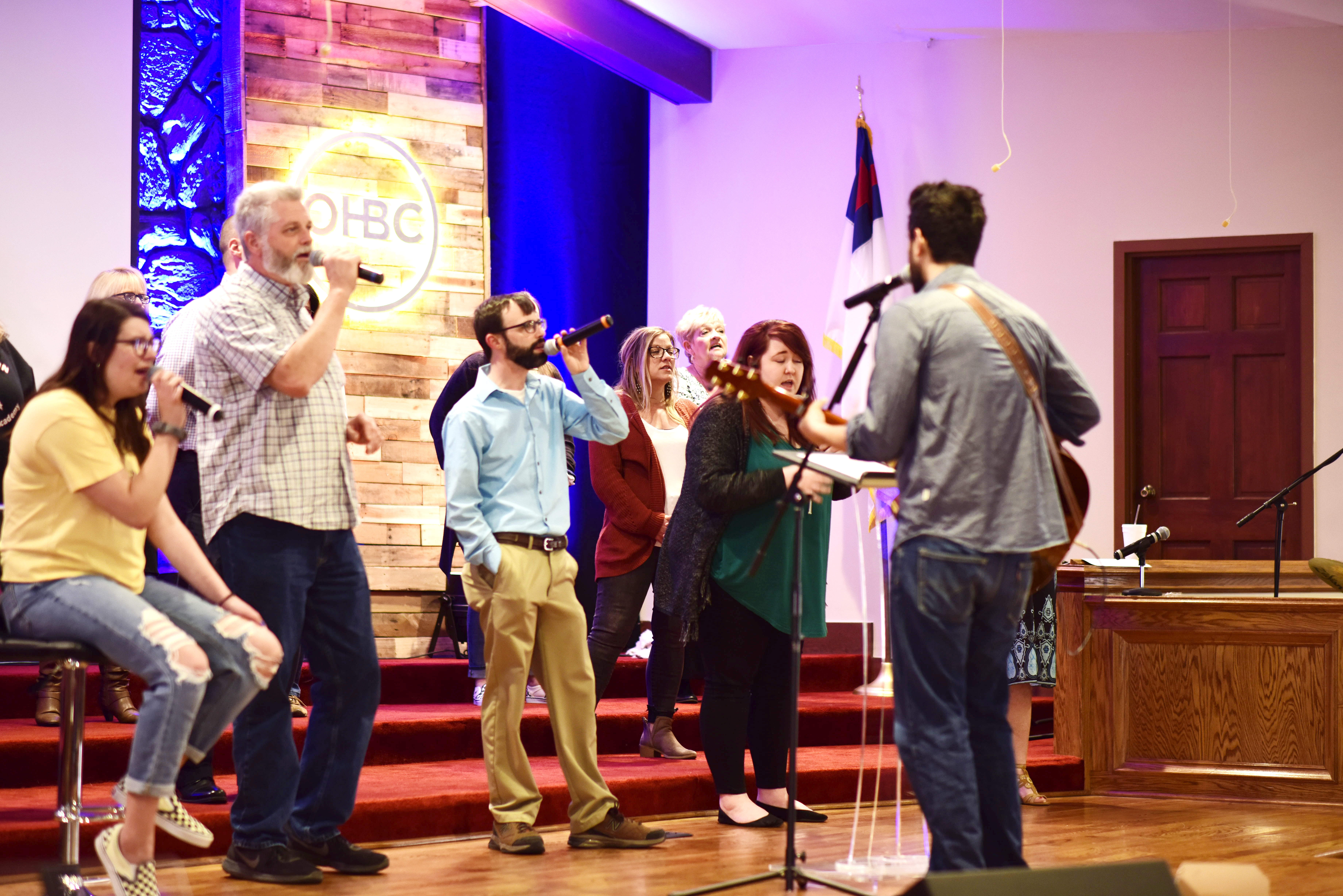 That’s right, OHBC. Josh is learning how to play the piano to be a better leader in our music ministry. That’s dedication! He also explained the process of his role in preparing a worship set for any given Sunday, which will begin a minimum of 2 weeks out. He says he starts by speaking with James, asking what the general mentality of his sermons will be for the next couple of weeks. This is so he can choose music relevant to what our congregation will be focused on. He then begins preparing the music for the band, which involves getting the keys of each song as close as possible, so that the transition between them can be smooth.He also has to factor in the tempo of each song (how fast or slow the song is), and put together chord charts (music for the band). He says he is currently working on building our database of songs, cleaning up what we already have and adding new songs. If you didn’t know the blessing that Josh is to our music ministry, you definitely do now! 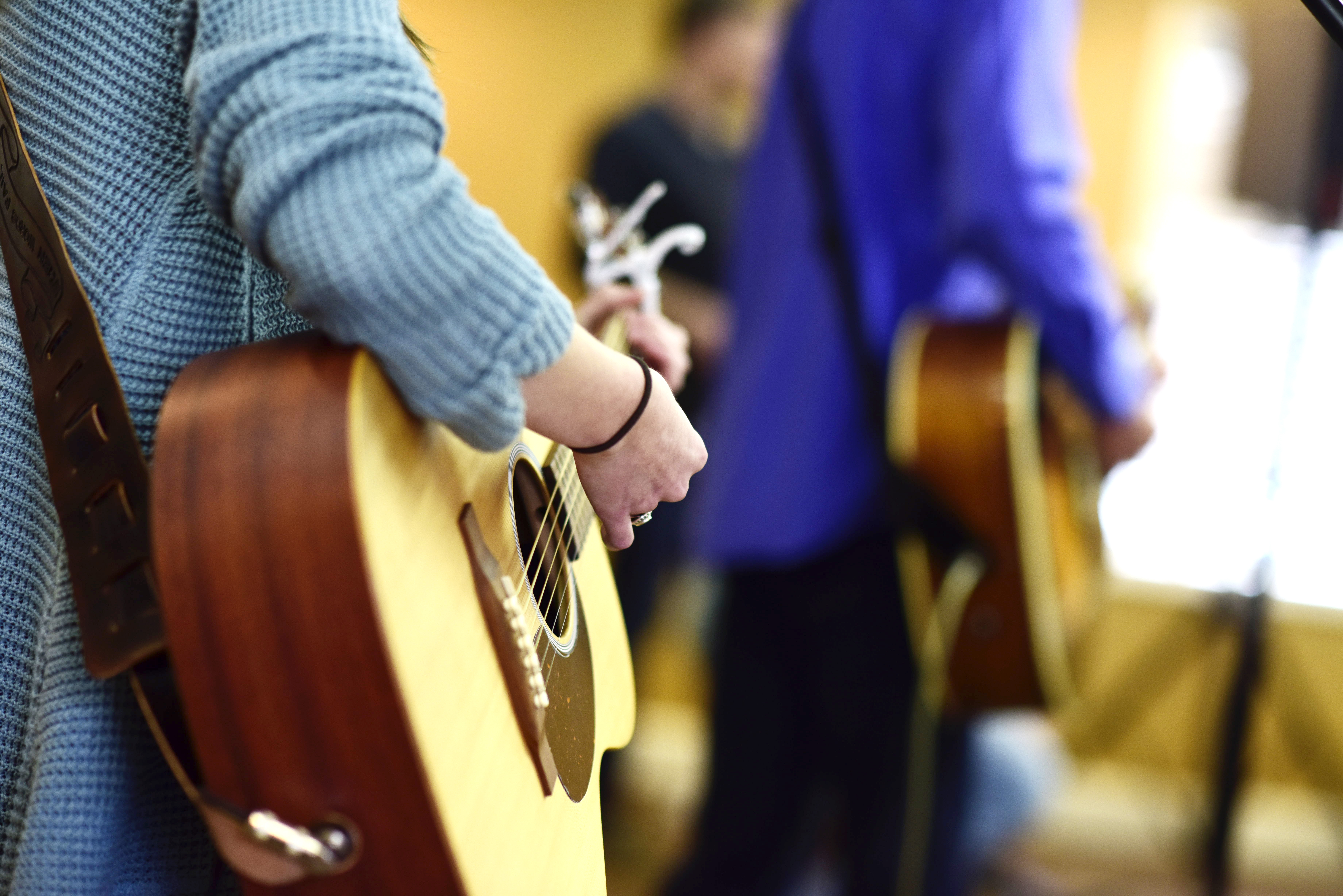 Next, after practice, I asked Jarred Summey a few questions. Jarred is our choir director, and has extensive experience and knowledge doing so. He also teaches all chorus classes at 2 different schools, but still manages to work extremely hard and efficiently in preparing our choir to sing in the service.Jarred and his wife, Beth Summey, began attending Oakland Heights in 2011, and according to him, did not intend on getting plugged into the music ministry at first. He describes his history in playing music professionally, such as the time he spent working with our previous worship leader, both in church and in his career as a chorus teacher. He says that “the Lord had kind of placed it on my heart that he was about to call me to step up into a leadership role, because the summer before I stepped up, it kept coming to mind over and over. ‘Are you ready to step up? If you had to do what Andrew does, are you ready to step up?’” (Andrew was the previous music minister at OHBC). When you listen to Jarred’s testimony of how he became a worship leader in our church, it is abundantly clear that God molded his life through his music knowledge and experience, so that he would be ready to become a worship leader at Oakland Heights. Speaking of himself and Josh Starr, he says “We thought we were stepping in on an interim basis. But God’s plan was to have us hang around.” 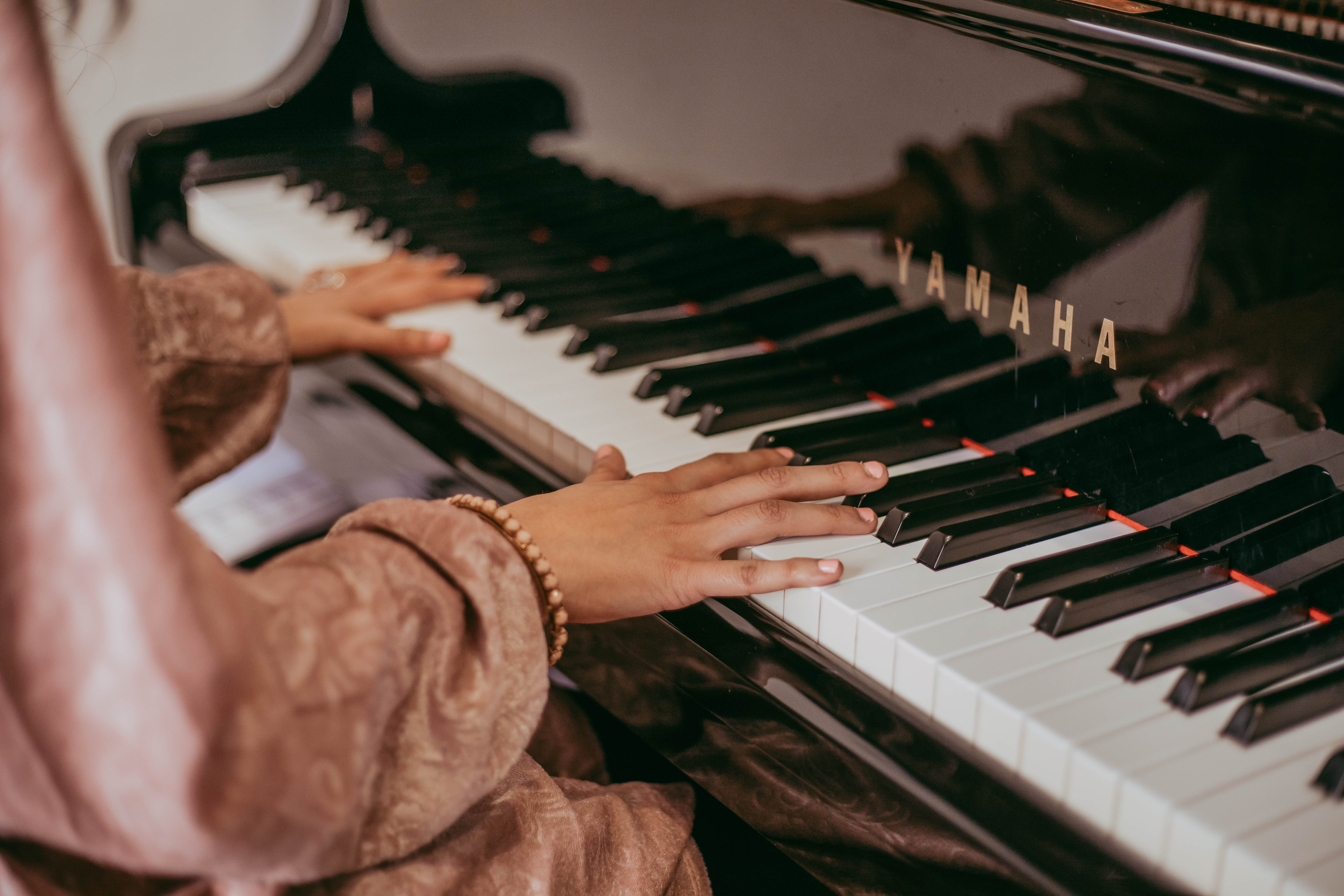 Jarred’s favorite part of leading worship at Oakland Heights is when the choir and the Holy Spirit are in tune with one another, and what God has for our congregation during that service. He also says he loves singing songs that are full of energy. I asked him how long it takes the choir to prepare for a special event or holiday, and he said “Usually, for a holiday, we will start 5 or 6 weeks ahead of time. This past Christmas, we did a Christmas musical, and we started preparation on that the second week of August. There’s definitely a lot of behind the scenes work that gets put in to make it happen.” He continues later, talking about preparing for a normal Sunday, saying “Sometimes we do a song that the church may have been doing for years, but we don’t have sheet music.” Jarred has to spend quite some time looking for sheet music similar to what the choir is used to singing, so that he can provide musicians with it. If you know anything about music at all, you can guess what a challenge that must be. The last question I asked him was what he thought the most difficult part of leading worship is, and his answer was this: “Everybody has their preferences. Us included. The most difficult thing at times is asking yourself, ‘Is this my preference? Is this Josh’s preference? Is this the choir’s preference? Or is this God’s preference?’ And within our congregation, we want every worship set to have something that everybody can engage to and connect with. We don’t want any demographic to feel like they’ve been left out or isolated. We have to keep the focus where it’s supposed to be, which is glorifying God through song.” 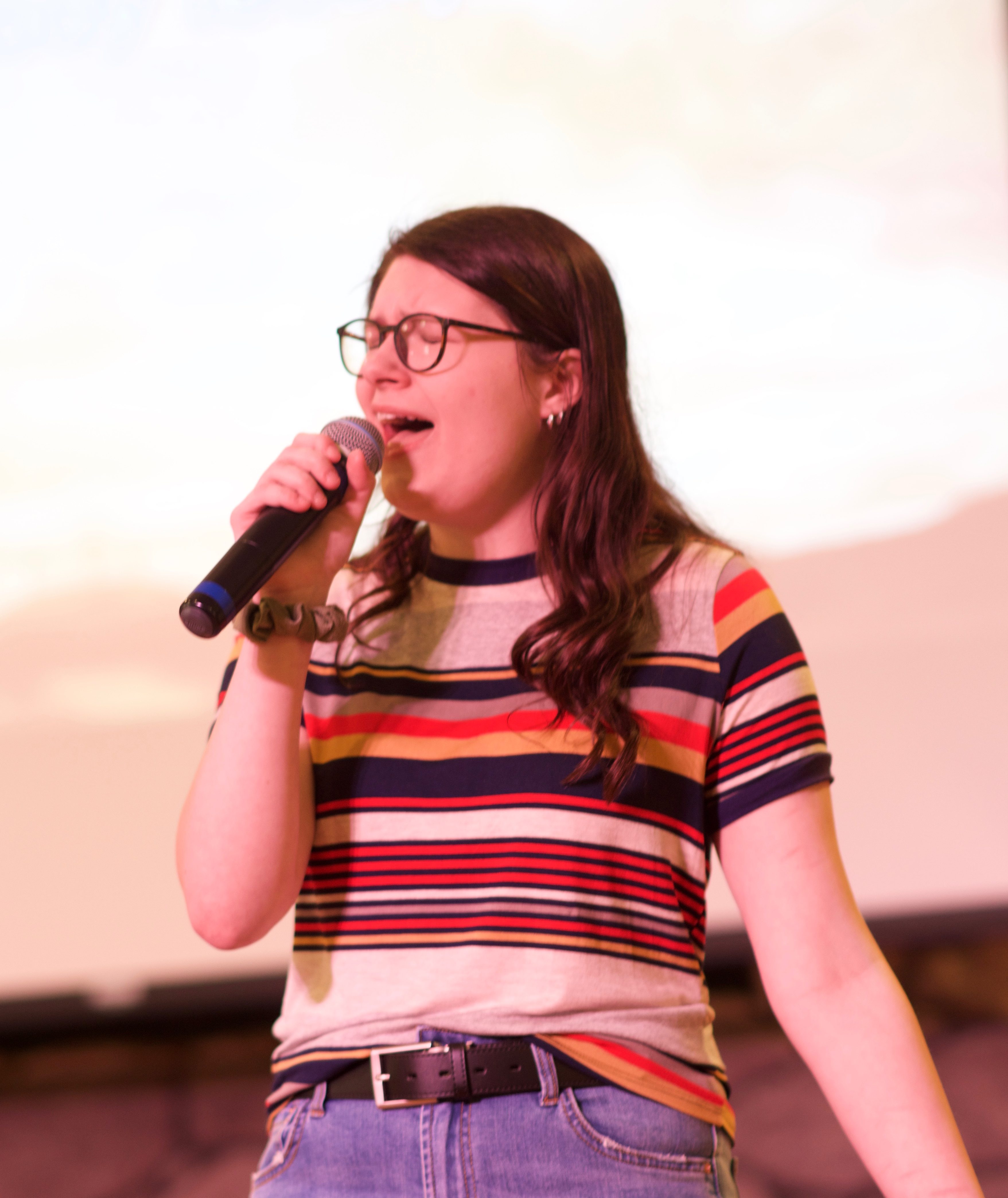 Our choir also graciously allowed me to interview them, and I only had to ask 3 questions to get some good insight on why they serve. When asked what their favorite thing about being in the choir is, Shirley Brown stated that her favorite part was “being able to freely worship the Lord. I think that’s me and Him totally connecting.” Jamie West said she loves the fellowship, and Joseph Hill says he enjoys watching the faces of our congregation go from “drab, to enlightenment.” I also asked them what they’d like for our congregation to know about our music ministry, and all of their answers were similar. Dina Yates stated that she’d like for everyone to know how much time and effort is contributed to our music, and Jarred Summey and Shirley Brown both discussed how anyone can join, and you don’t have to be able to read music. Jarred says “Half the things we do, we ain’t doing what’s on the page anyway!” 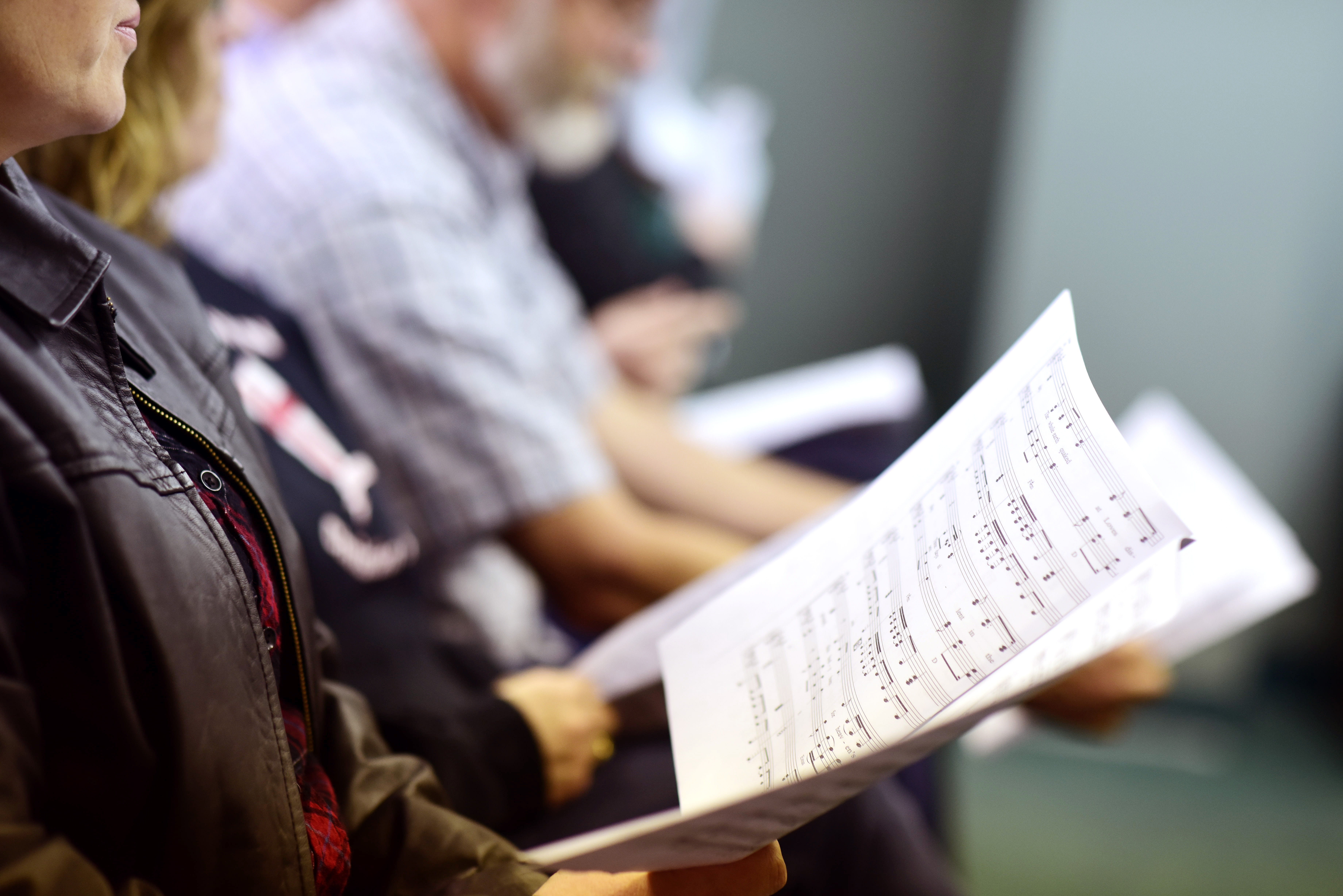 One of the biggest blessings during the interview process happened when I asked how long everyone had been a member of the choir. 15 years, 18 years… and then Paulette Long spoke up. “It’s been longer than that for me. I think I joined the church in 1975, and they said ‘Do you want to sing in the choir?’ And I’ve been there ever since.” She begins to reminisce on the choir directors we had around that time, and then began to softly sing a song she’d sang then… “Like the woman at the well, I was seeking for things that could not satisfy…” 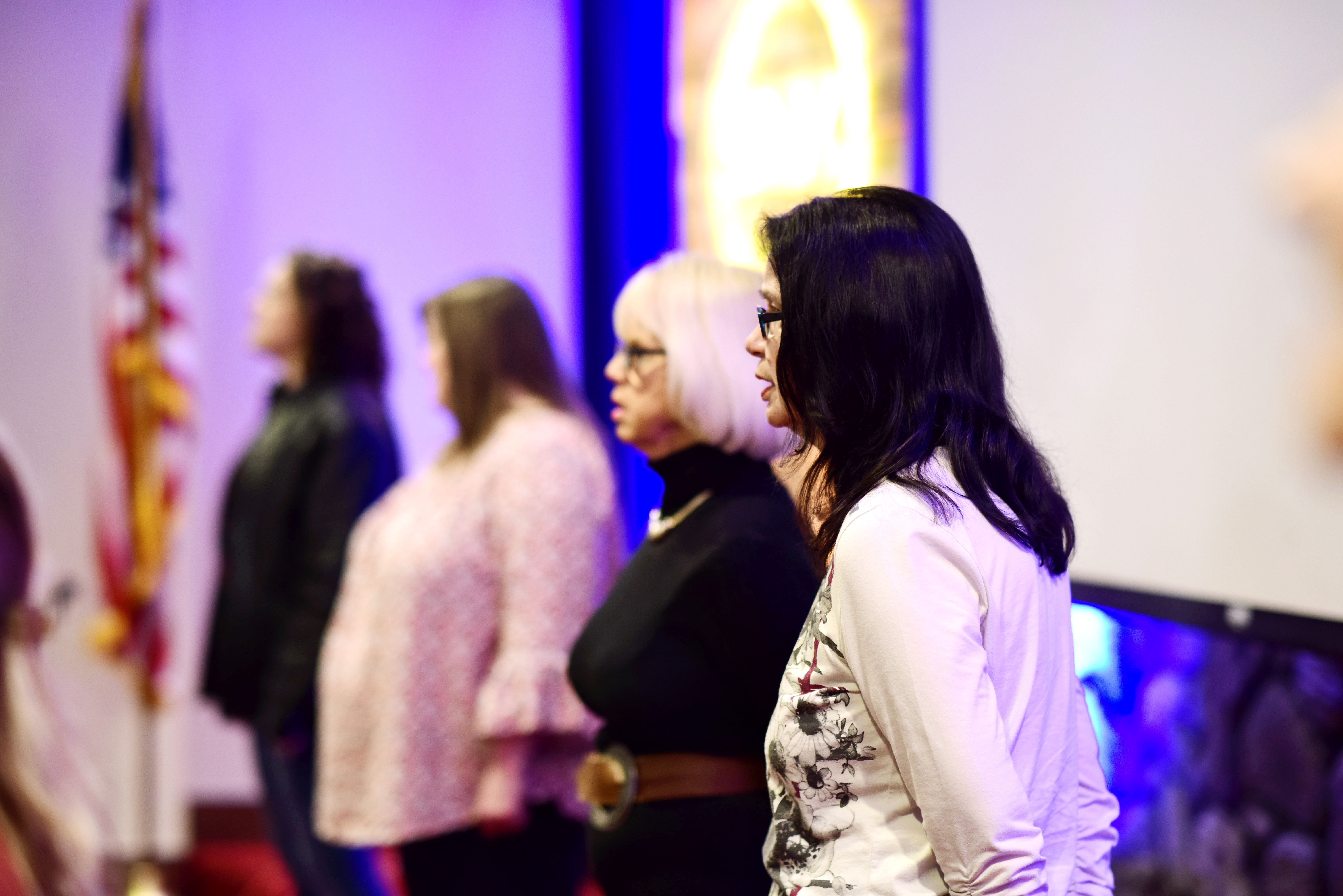